Today was amazing and there were so many things I can’t even begin to explain what all happened.

We started the day off with a morning tour that covered most of London! Our tour guide was amazing and our guide was very entertaining (not like those tour guides that think they know everything and you no nothing)! We got the whole history run down of the city and stopped at some major places. We went to the Tower of London, walked over the Millennium Bridge, into the 2nd largest Cathedral in the world (St. Paul’s Cathedral), and saw many many more monumental buildings and statues. The tour ended with going to Buckingham Palace and watching the change of the guards. It was incredible.

We then got to have the afternoon to ourselves. We walked around central London for awhile and then went to a family Indian restaurant for lunch. I’m not a big spicy food person but I figured I’m in a new country so why not try something new? I wasn’t too bad!

I then hopped on the underground and headed to King’s Cross Station. If anyone knows why that is such a major place, we would be best friends. I am a HUGE Harry Potter fan and going to Platform 9 and 3/4 has been like a dream of mine! Of course I had to get in line to get my picture taken on the platform, I would hate myself if I didn’t. Ahhhhh it was so fun!! Haha I also went in to the Platform 9 and 3/4 store they have there and bought a Hermione wand. 😂🙈 I know I’m a child. Being there was amazing!! 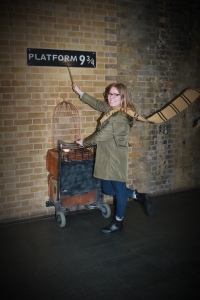 For dinner, a friend on my trip and I went to this place called Duck and Waffle Local. It’s just as it sounds. It’s a bar/restaurant that specializes in duck and waffles. I ordered some mac and cheese that had a duck egg yolk on top. It was delicious and so different! For dessert, I had a mini waffle with caramel and fudge brownies. Seriously you guys, this place was to die for! I also ordered a drink and found something super cool and weird. I ordered a vodka lemonade (my usual) and they gave me a glass with vodka in it and a side bottle of lemonade so I could mix my own drink. I don’t know if other states around the country do this but in Minnesota that is NOT a thing. It was awesome.

I’m now back in my hotel room trying to keep my eyes open. I love it here, it’s definitely my perfect vacation. Tomorrow I’m taking on the London Eye and Phantom of the Opera at the London Theatre, I don’t really need to say this but I am so excited!

Hello everyone and happy March! It’s that time of year again when we start to get the much needed spring break (if you still get one this year) and our break officially started today!

Growing up we never did anything over spring break and I was used to that. Now that I’m older, I wanted to do something for a change. A friend had told me about this traveling company for 20 somethings called Education First. Basically they book trips that are completely affordable for anyone in their 20s around the world. I always dreamed of going to Paris but I never thought it would be possible. I went on the site and found a week long trip that spends 3 days in London and 3 days in Paris. I fell in love with the idea instantly and booked the trip without thinking twice. To make it even better, the trip fell right over our spring break!

Yesterday I boarded my nonstop flight from Minneapolis to London at 4:45pm. I was so excited I didn’t notice that a boy I casually dated for a month was on the same flight. 😑 When I finally noticed him I tried as hard as I could to not make eye contact with him. UGH like really what are the odds? Once on the flight, however I forgot he was there. Our flight was scheduled to leave at 5:35 but we didn’t leave until 7 because Minnesota was in the middle of a snowstorm (again) and they had to “de-ice” the plane. When we finally took off I was exhausted!!!

The flight wasn’t bad, just long. I tried to sleep but it wasn’t the best rest. When we arrived in London we were so excited to get off and meet our driver (I was on the same flight as 2 other people going on the same trip. EF is so amazing, they arranged to have personal chauffeurs pick us all up.) We didn’t get that lucky though. We got off to go through immigration and we honestly stood in a line for an hour and a half. At this point, we were all tired, sweaty, and starving so we just wanted to get out of there. Our driver was awesome and took us straight to our hotel called the Ibis in Canning Town.

We were able to check in with our tour director and then met up with some more people in our group. We walked around our neighborhood and then stopped at a little Turkish restaurant that was delicious. We came back to our hotel and now I’m just laying on my bed trying to stay awake. We have a group mixer and appetizers tonight and then I’m finally off to bed.

Tomorrow we get a full tour of the city and I am so excited! This is going to be the week of my dreams and I will try to share as much of it as I can. Happy spring break everyone!

By a teen girl who talks pretty much everything.

Because gymnastics is a comedy, not a drama

Matt's Gymnastics Blog
An Apple for the Teacher

A Petite Slice of Life

Musings from a teacher, runner, knitter, baker and reader

Three Cats and a Girl

Musings and thoughts of a freshly married gal who needs a cat and more succulents in her life.

There's No Crying In Teaching

Well, sometimes, but never in front of the class!

Confessions of a Real Teacher

Inside the non-pinterest worthy classroom

I'm a teacher in an "urban" school, just trying to brighten peoples day and share the stories of some of the crazy shit that happens in my classroom.

A Kindergarten Girl Teaching in a Virtual World

The Fired Up Teacher Blog

Everything NEXT in education. Your FAVORITE weekly PD!